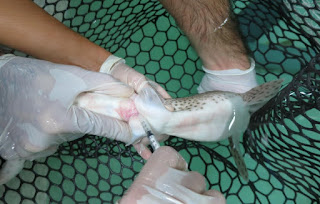 Elasmobranchs are one of the most endangered vertebrate groups on the planet, but despite this situation the use of reproductive techniques in elasmobranch conservation strategies has been scarce. Among these techniques, sperm preservation is a potential tool for ex situ conservation and aquaria sustainability. However, there are no widespread preservation protocols for elasmobranch sperm, and shark sperm cryopreservation has never been achieved before. Here we present the establishment of successful cryopreservation protocols for elasmobranch sperm, tested in several species. We have formulated a sperm extender that can be used for different elasmobranch species, capable of maintaining sperm motility for several weeks. Additionally, we achieved the cryopreservation of sperm by previously diluting it in our extender and supplementing it with different combinations of cryoprotectants. The effects of methanol and dimethyl sulfoxide as permeating cryoprotectants were evaluated, as well egg yolk as a nonpermeating cryoprotectant. Sperm quality was assessed by studying the motility and membrane integrity post-thawing, demonstrating its effectiveness in the 10 species tested, including two which are considered Critically Endangered. This is the first time that shark sperm cryopreservation has been reported, broadening our knowledge of the reproductive techniques that can be applied to elasmobranchs and laying the foundations for the first cryobanks for shark and ray sperm. Outcomes from this study will be useful for ex situ conservation efforts developed by public aquaria. A regular supply of frozen sperm will reduce the problems that result from the transport of specimens, inbreeding or lack of synchronized reproductive cycles in captivity.