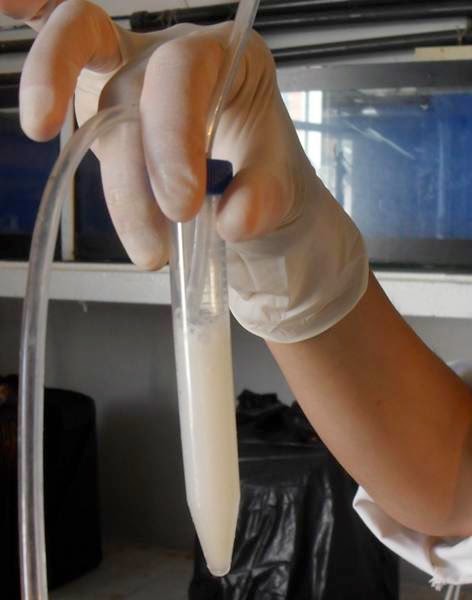 In order for European eel aquaculture to be sustainable, the life cycle should be completed in captivity. Development of broodstock diets may improve the species’ reproductive success in captivity, through the production of high-quality gametes. Here, our aim was to evaluate the influence of dietary regime on muscle composition, and liver lipids prior to induced maturation, and the resulting sperm composition and performance. To accomplish this fish were reared on three “enhanced” diets and one commercial diet, each with different levels of fatty acids, arachidonic acid (ARA), eicosapentaenoic acid (EPA), and docosahexaenoic acid (DHA). Neutral lipids from the muscle and liver incorporated the majority of the fatty acid profile, while phospholipids incorporated only certain fatty acids. Diet had an effect on the majority of sperm fatty acids, on the total volume of extractable milt, and on the percentage of motile sperm.
Here, our results suggest that the total volume of extractable milt is a DHA-dependent process, as we found the diet with the highest DHA level induced the most milt while the diet with the lowest DHA level induced the least amount of milt. The diet with the highest level of ARA induced medium milt volumes but had the highest sperm motility. EPA also seems important for sperm quality parameters since diets with higher EPA percentages had a higher volume of milt and higher sperm motility. In conclusion, dietary fatty acids had an influence on fatty acids in the tissues of male eel and this impacted sperm performance.
Publicado por Juan F. Asturiano en 8:58