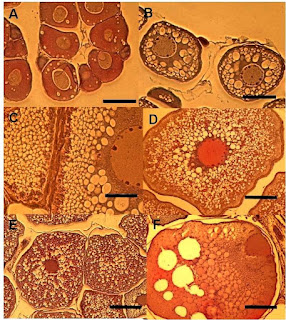 Abstract
In teleosts, vitellogenin (Vtg) is a phospholipoglycoprotein synthesized by the liver, released into the blood circulation, and incorporated into the oocytes via endocytosis mediated by the Vtg receptor (VTGR) to form the yolk granules. The VTGR is crucial for oocyte growth in egg-laying animals but is also present in non-oviparous vertebrates, such as human. VTGR belongs to the low-density lipoprotein receptor superfamily (LDLR) and is also named VLDLR (very low density lipoprotein receptor).
In this study, we identified and phylogenetically positioned the VTGR of a basal teleost, the European eel, Anguilla anguilla. We developed quantitative real time PCR (qRT-PCR) and investigated the tissue distribution of vtgr transcripts. We compared by qRT-PCR the ovarian expression levels of vtgr in juvenile yellow eels and prepubertal silver eels. We also analyzed the regulation of ovarian vtgr expression throughout vitellogenesis in experimentally matured eels. Vtg plasma level was measured by homologous ELISA experimental maturation. Our in silico search and phylogenetical analysis revealed a single vtgr in the European eel, orthologous to other vertebrate vtgr. qRT-PCR studies revealed that vtgr is mainly expressed in the ovary, and also detected in various other tissues such as brain, pituitary, gill, fat, heart and testis, suggesting some extra-ovarian functions of VTGR. We showed that vtgr is expressed in ovaries of juvenile yellow eels with no higher expression in prepubertal silver eels nor in experimentally matured eels. This suggests that vtgr transcription already occurs during early pre-vitellogenesis of immature eels and is not further activated in vitellogenic oocytes. European eel Vtg plasma level increased throughout experimental maturation in agreement with previous studies. Taken together, these results suggest that vtgr transcript levels may not be a limiting step for the uptake of Vtg by the oocyte in the European eel.
Publicado por Juan F. Asturiano en 5:10